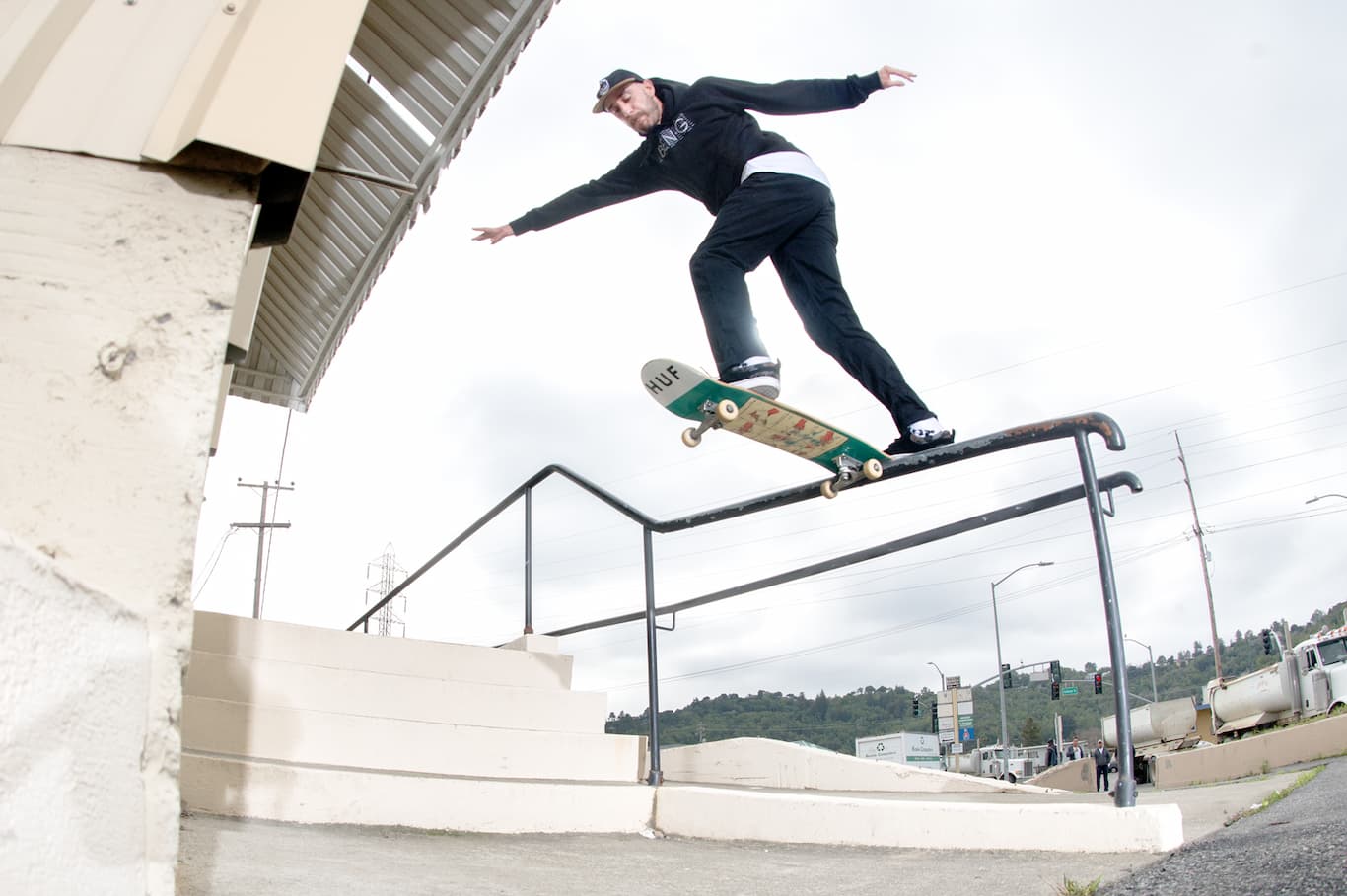 All-around skater Peter Ramondetta was known for destroying streets and obstacles anywhere but is perhaps best known for tackling spots around his adopted home city of San Francisco, California.

Peter thought nothing of trying a nose wheelie down the most challenging section of Lombard in San Francisco, officially known as the most crooked street in the world. He has also made the city his own by bombing other examples of its famous hills.

He’s gone quiet in recent months, but at one time made countless appearances in skateboard magazines and popular skate videos such as Real’s Since Day One video series. He also appeared doing gravity-defying spots in Real’s ‘Surveillance’ series of videos.

Gone quiet refers to his low profile physically. However, in fact, Peter is well known for being someone who lets his skating do the talking for him. As well as being a level-headed participant, who still manages to show huge courage and commitment.

Also known as Pete or Petey, this highly respected street skater’s surname is from Italian heritage. However, he originates from Wichita, Kansas, which is aptly also known as the “Air Capital of the World.”. Peter Ramondetta’s deeply religious family moved to Guthrie, Oklahoma when he was four before relocating to Tulsa, some years later.

Though he became a regular soccer player, Peter also began to develop a passion for skateboarding as a kid. He started skating at around eight years old, using second hand boards which “barely had a tail” and any other equipment he could get hold of. His first board was an old Powell with slimeball wheels, donated by a neighbour.

Not religious himself, Peter preferred to use his Sundays learning his craft, by paying to skate on a ramp inside the gym. He didn’t see this as rebelling, just following his own path. Though he has since said in an interview that he’s now…

“…rebelling against weird people I met in Tulsa because you just see so many weird religious freaks out there. It’s right in the Bible Belt and people just take it way too seriously.”

How did he go from hand-me-down boards to being on the sponsorship roster of top skateboarding brands? It came from earning the moniker of “Local Hero”.

In the 1990s, when he was living in Tulsa, Peter was making a name for himself in local street skate circles and had gained a reputation as being the one to watch. Then, after a skateboard demo held by the Toy Machine team, Peter did some moves at Tulsa’s well-known downtown Bartlet Square, alongside such luminaries as Kerry Getz, Brian Anderson, Elissa Steamer, and Ed Templeton.

Peter more than held his own with the pros. So, writers covering the Toy Machine tour dubbed him the ‘Local Hero’ and it stuck! From there, not surprisingly, he was signed up to a sponsorship deal from Real skateboards.

Sponsorships and brand rep gigs then followed with HUF, Thunder, Spitfire, Roughneck Hardware, Newell, Monster, Loud Headphones and Mob. When he disappeared from public view, Peter was skating with HUF, and you can catch him in HUF Worldwide 001.

Peter loved travelling with his brand – especially finding fresh spots and enjoying the beaches in Australia – but was always happy to be back in San Francisco too. He was known for using yoga to stretch and keep loose and to prefer clean living to save cash and focus more on his sport.

He also loved to be challenged and forced to use his logic and creativity before he even put his feet on his board.

The street skateboarder was once quoted as saying his favourite trick is bean plant to disaster, which he learnt to do at the Oakland underground bowl.

What is Peter Ramondetta doing now?

Though he updated his Facebook profile in April 2020 to read ‘Professional Skateboarder’ it appears he’s gone quiet since – on social media and in person. Causing lots of discussion on skateboarding message boards.

One theory is that he has gone low due to his lifelong issues with epilepsy, which have led to some gnarly injuries over the years, including a substantial ramp burn he later covered in a tattoo.

Whatever he’s doing, we wish the quiet ‘Local Hero’ well.