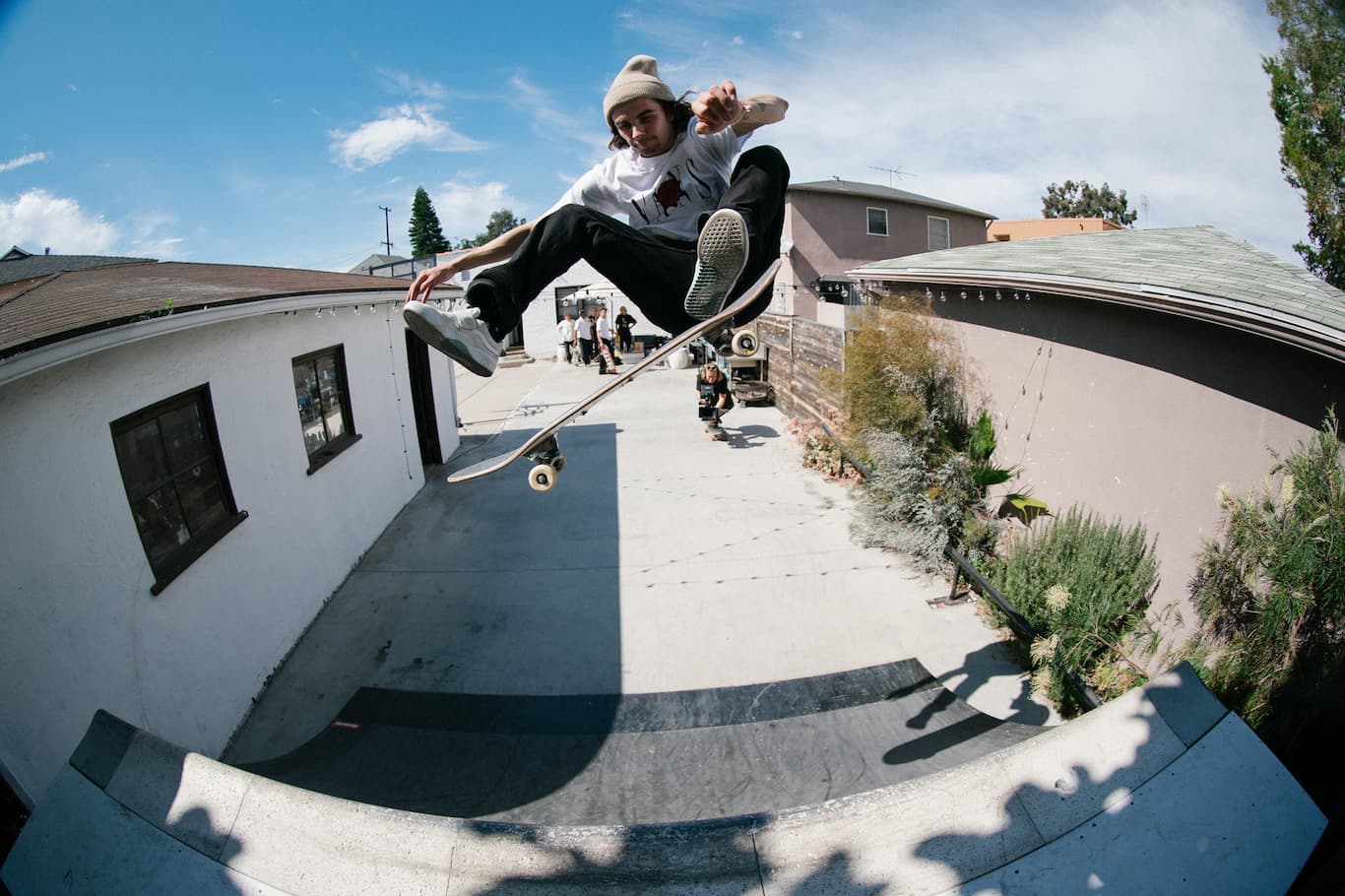 Kyle Walker has been described as “the skaters’ favourite skater”. This could be partly due to his reputation for being quietly calm and affable, and for being such a great representative of the sport when he does one of his many press interviews.

He is also humble and grateful for all his breaks and support. In fact, Kyle Walker recently posted, “Never not thankful” on Insta and tagged his sponsor Vans.

Of course, much of his popularity comes from his skills as a pro skateboarder. This includes the way he shows his confidence and contentment with huge smiles even when faced with the most intimidating stair sets and challenging rails. Walker is also respected for his smooth grinds and stomping big drops.

The athleticism of his skates are also matched by great balance and agility, and all the while maintaining a goofy stance.

Kyle is also well known for directing his energy into a healthy lifestyle, rather than partying hard, which has also earned him kudos in the skateboarding world. This tunnel vision, to be the best at what he does and enjoy it, has been part of his makeup from day one, even before he turned pro in 2015 for Real Skateboards.

He moved to LA when he was just 16

From boy to man, Kyle has shown immense talent and dedication. He was only 16 when he headed out of his small hometown in Oklahoma to live in Los Angeles, so he could skate ‘seriously’ in the perfect weather, with great spots. However, he made this move only after winning the full support of his parents, who could clearly see where both his talent and passion were focused.

Interestingly, though, Kyle Walker also showed an early talent for baseball and could have pursued that path. Instead, he chose skateboarding. He perfected his craft on the LA streets, before adding a touch of irreverence to the strait-laced world of skateboarding competitions.

If there was one moment that proved that his choice was a wise one, it had to be when he received the news he had scooped the highly prestigious Thrasher’s Skater of the Year award in 2016. He became an SLS Pick in that same year.

Though Kyle is clearly proud to be a brand representative for Vans he has also picked up a list of other valuable sponsorship and support deals in his career. For instance, from Real, Thunder, Spitfire, Active, Cortina Bearings Co., and New Era.

Kyle appeared in Vans’ iconic full-length skateboarding film, ‘Propeller’, as well as having a major role in the Vans’ ’No Other Way’ video.

Appearing in videos is actually another layer of Kyle Walker’s skateboarding talent! He has proved repeatedly that he can demonstrate the finer points and heady heights of this sport on film. He has made countless video appearances for his brands, including Volcom’s “Holy Stokes!”, a series for Real called “Surveillance” and of course, not forgetting his spectacular six-kink rail grind in the Thrasher x Vans “No Other Way”. At the time of going to press, his most recent video was “Ruby” Vans. There’s a great compilation of Kyle Walker moves on the street and in skate parks.

Kyle Walker got his first skateboarding shoe from Vans in 2017, and in 2020 he got a new signature shoe and skateboarding clothing line. The Kyle Walker Pro 2 and apparel pack is a minty fresh combination of white and green on the sole and interior accents. The skateboarding pro wanted practical, understated and classy (like him) and got it!

What is Kyle Walker doing now?

Kyle Walker still lives in California, but he has one foot firmly planted in his roots and credits the support of family and friends in Moore, Oklahoma with getting him so far in his chosen sport.

He’s also a big fan of travelling with skateboarding and is quoted in one interview saying,

“I thank skateboarding for being able to see half the world. It’s kind of crazy… I don’t think I would trade it for anything.”

Walker is also considered one of the best in the sport and is gifted at finding sweet street spots to demolish on his travels, which his many fans are happy to hear!