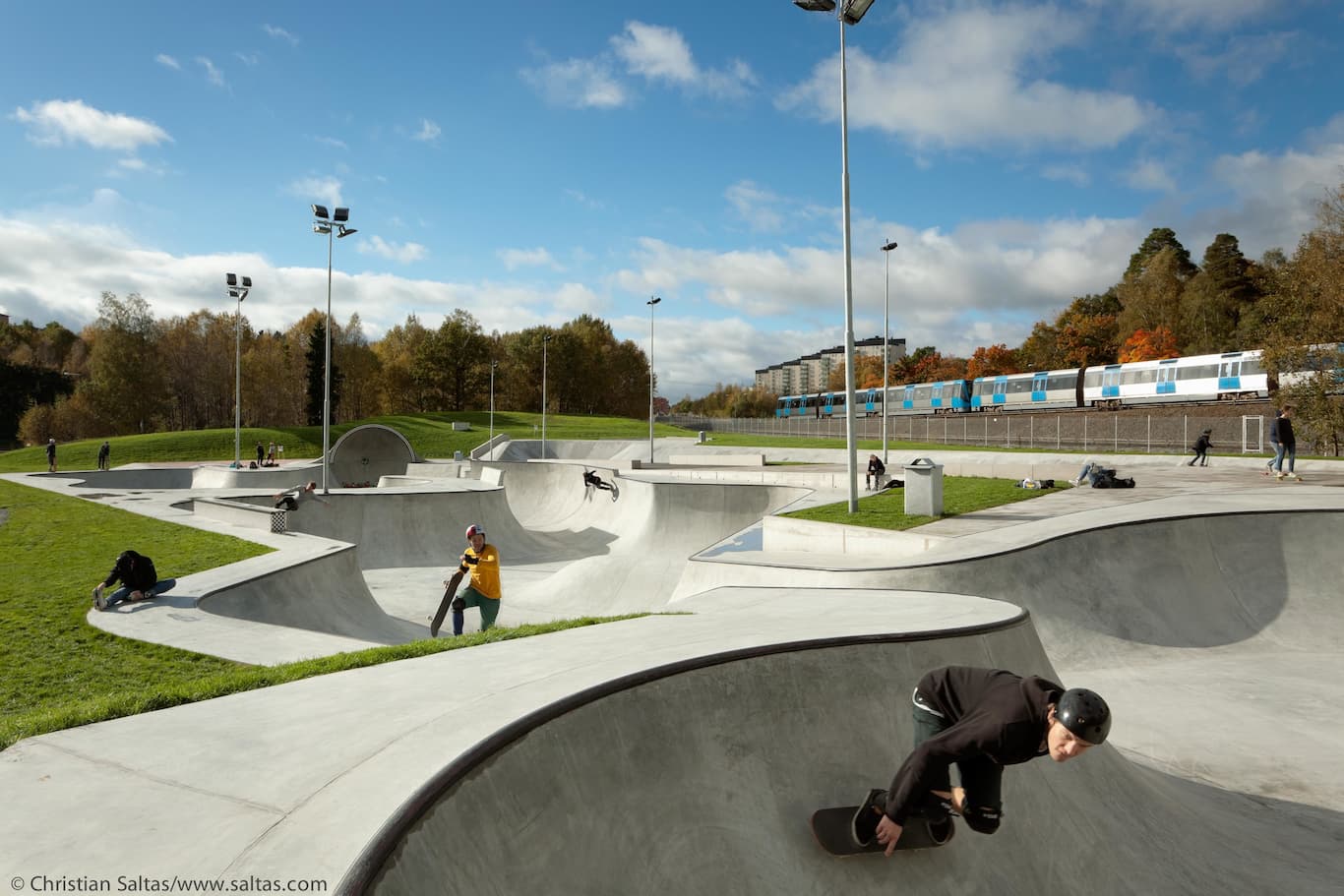 When you hear news of an ambitious multi million-pound upgrade for a European skate park, excitement can be tapered with a healthy dose of scepticism. Will the reality match the hype?

Back in 2008, we brought you the scoop that Highvalley Skateworld in Sweden was the subject of a 3 million Euro Dollar investment. With work due to start the following year, and an opening date in 2010.

It’s high time we looked at what impact that plan had, and whether this is a skatepark that improved by enough notches to warrant that kind of spend on it. Also, how well did the development of Sweden’s Highvalley Skateworld meet the current demands of professional skateboarders?

Where and what is it?

First, a bit of background. The name Highvalley is a translation of Högdalen, as this skatepark is in that suburban district of South Stockholm.

Anyone other than serious skateboarders has always been discouraged from using it. Though the not-for-profit organisation behind it – Högdalens skateboardförening (Högdalen’s skateboard association) – works hard to open up the sport to more people. Including offering the facilities and equipment free of charge.

As the Högdalens skateboardförening is so dedicated to the sport, the Highvalley complex holds some highly attractive world events and competitions, and some consider this a ‘bucket list’ destination. Not least as it’s the biggest skatepark in Northern Europe.

We don’t need to tell you why their headline event –Bowlstock – skipped a couple of years. However, we certainly have everything crossed that this top European skateboard festival comes back strong next year. Not least as it’s an all ages and all levels competition, combined with a contemporary live music festival. As well as all the skateboarding stalls and food trucks that make such events extra fun.

Now down to the year-round reasons to visit Sweden’s Highvalley Skateworld. With an update on investment impact there.

In 2008, we brought you an interview with one of Highvalley Skateworld’s supporters and campaigners, Ants Neo. He explained the pinnacle of plans for the site was a concrete structure.

To spend the cash wisely and well, the Högdalens skateboardförening brought in Pillar Design Studios to turn their vision into – well something concrete!

The company’s website features some good images of the fruits of their design and build at Highvalley Skateworld.

The plan and its execution certainly created a concrete skate park that ticks all the boxes. It is a large skatepark, with all the features that make concrete structures interesting, including bowls, ditches, ramps, rails and a snake run, and of course a Slalom Course and Flat Land/Freestyle area.

Another of the things added to the park’s appeal is good lighting – Sweden is not exactly blessed by year-round sunshine.

(Though back in 2008, we did wish that the site plan included a heating system to keep snow off the structures, and that didn’t happen. Tssk! Guess you can’t have everything!)

The local skateboarding associate organises times when different groups can use the structures freely and safely. Including sessions for slalom skating, female skaters and even a time slot for a ‘queer skate’. You have got to love the Swedes!

Also, it has a children’s area for while the ‘big kids’ practice, though children under eight must be supervised at all times.

Investment in the park continues. The Högdalens skateboardförening recently announced the arrival of new obstacles for Highvalley Skateworld, thanks to a grant from “the organisers of You Bastard, in Obsan”

When is Highvalley Skateworld, Skateworld open? It’s accessible 365 days a year as it’s a public facility. However, as you would expect the courses are only open in Spring and Summer or when the weather makes it safe.

You can get refreshments in a café run by Högdalen’s skateboard association in the season too.

It is easy to reach using the Stockholm subway system. Use the green line to Högdalen to get to Highvalley Skateworld.

You only need to see the Instagram account for Sweden’s Highvalley Skateworld to see what a great vibe there is. As well as the way the investment and local support have made it a truly inclusive skate park, but also one well worth a visit from out-of-town skateboarders who like a challenge.

Keep checking in with us, for more updates on global skateboarding destinations.